How to Catch A Wild Idea: Links and Freebies

Links to the Free Kindle Stories:

Tai's been hankering to get behind the wheel since The Dangerous Edge of Things. But when your boyfriend has control issues, sometimes the best laid plans take years to come to fruition.

In this, the epilogue to Reckoning and Ruin, Tai's patience is rewarded and she finally gets her hands on Trey's Ferrari. And it's just as zoom-zoom as you might imagine.

"Not Even Past"
A lush Victorian B&B, chilled champagne for two, and a top-of-the-line metal detector—Tai Randolph is ready for Valentine's Day. Unfortunately, Trey Seaver—her sexy if somewhat challenging boyfriend—is not cooperating. He rightly suspects that Tai's got more than romance on her mind, and he's determined to uncover her agenda before setting one foot in the bedroom. Tai has one night to convince him that love and sleuthing really do mix, even in a mysterious inn filled with history and stories and maybe even hidden treasure.

Matt Cardin's Course in Demonic Creativity: A Writer's Guide to Inner Genius (a FREE e-book available for download as a pdf)

The Chauvet Cave (a.k.a Caverne du Pont d'arc): A website with links to the cave, plus a photographic gallery 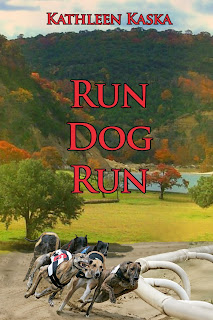 Research for my books takes me to all sorts of unique places, most of which I enjoy. For my Sydney Lockhart series, set in the 1950s, I visited historic hotels where the stories take place. Before that, when I was a staff writer for a health and fitness magazine in Austin, I cycled, hiked, and climbed in some of the best parks in Texas. And I’ve canoed, floated, snorkeled, and scuba dived all over Texas and the Caribbean for other travel articles.

But the research for Run Dog Run sent me to a few places I wasn’t thrilled to visit.

A knot formed in my stomach the day I drove up to a greyhound racetrack outside of Houston. I wasn’t sure what to except, but if I wanted to write a book about greyhound racing, I needed to watch the dogs run. I spoke to the staff about what happens before and after races, where the dogs are kept when they are not racing, how much of their lives are spent running, and how to bet on the dogs. Even though I was there on a weekend, there wasn’t a huge crowd of spectators, and to tell the truth, most of them seemed to have a languid attitude.

I also toured a greyhound adoption facility where the dogs were well taken care of. The only problem is that I wanted to take all of them home. In my book, I included a character who operates an adoption facility as part of my quest to bring about awareness of the adoption of retired racers.

I read several books and articles about dog racing, some in support of the sport and some against it. The latter group painted a disturbing picture of what those dogs experience. After completion of my first draft, my then-agent told me I editorialized too much. He was right. A lot of it was zealous and too preachy. So I toned it down and gave just enough information to keep readers interested and not overwhelm them with my personal opinions. 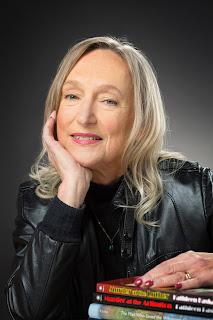 Kathleen Kaska is a writer of mysteries, nonfiction, travel articles, and stage plays. When she is not writing, she spends much of her time with her husband traveling the back roads and byways around the country, looking for new venues for her mysteries and bird watching along the Texas coast and beyond. Kathleen also writes the award-winning Sydney Lockhart mystery series set in the 1950s. Her first two mysteries, Murder at the Arlington and Murder at the Luther, were selected as bonus-books for the Pulpwood Queen Book Group, the largest book group in the country. Her latest Sydney Lockhart mystery, set in Austin, Texas, is Murder at the Driskill.

She’d been foolish and gone off alone, now she might have to pay the ultimate price…

The rocks along the bottom of the creek bed seemed to disappear. Kate felt the ropy, gnarl of tree roots instead.

The cedar break. She was approaching the road and soon the water would pass through the culvert. She knew that she would not make it through the narrow tunnel alive. Her lungs screamed for air. With one final attempt, she grabbed hold of a long cedar root growing along the side of the creek bank and hung on. Miraculously, it held. She wedged her foot under the tangled growth and anchored herself against the current. Inching her way upward, she thrust her head above water and gulped for air. But debris in the current slapped her in the face, and leaves and twigs filled her mouth, choking her. Dizziness overcame her ability to think—exhaustion prevented her from pulling herself higher.

She must not give in. Fighting unconsciousness, Kate inched her way up a little farther, and at last was able to take a clear breath. Her right arm hung loosely by her side, the back of the shaft had broken off in the tumble through the current, but the arrow was lodged in her arm. Numb from cold water and exhaustion, she lay on the bank as the water swept over her, and then, as quickly as it had arrived, the flow subsided and the current slowed. If she could hang on a few moments longer, survival looked promising. As thoughts of hope entered her mind, Kate feared that her pursuer might not have given up the chase. Perfect, Kate Caraway, just perfect. You screwed up again, she chided herself as the lights went out.

After five years in Africa, researching the decline of elephant populations, Kate Caraway’s project comes to a screeching halt when she shoots a poacher and is forced to leave the country. Animal rights activist Kate Caraway travels to a friend’s ranch in Texas for a much-needed rest. But before she has a chance to unpack, her friend’s daughter pleads for Kate’s assistance. The young woman has become entangled in the ugly world of greyhound abuse and believes Kate is the only one with the experience and tenacity to expose the crime and find out who is responsible. On the case for only a few hours, Kate discovers a body, complicating the investigation by adding murder to the puzzle. Now, she’s in a race against time to find the killer before she becomes the next victim.