A Walk Through Savannah's Bonaventure Cemetery


I love strolling in old cemeteries. I suppose this shouldn’t be a surprise to anyone – I am, after all, a mystery writer, and I write a character who used to be a tour guide in Savannah graveyards – but my appreciation is occasionally met with a shudder from others. 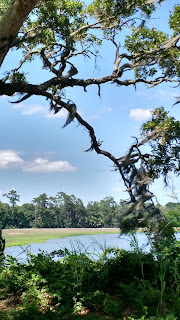 Those are places of the dead, they say.

Well, yes . . . and no. Places of the dead certainly, but for the living without a doubt. Graveyards are the collective scrapbook of a community – a family, a church, a town – and Savannah’s Bonaventure Cemetery is an especially gorgeous and intricate one.

First a plantation, Bonaventure began welcoming the dead into its marshy arms in the early 1800s. Situated at the bend of the Wilmington River, Bonaventure blends the manmade and the natural in a shifting intermingle, as tidal as the waters that run along its Eastern borders. The landscape is mostly silent – bird calls, rustling leaves, a high soft breeze winding through the Spanish moss and live oak branches – but occasionally the whine of an outboard motor will piece the quiet. Or a tour bus will rumble through. Or even – because this is still a working cemetery – a line of cars with their headlights on, laying a loved one to rest, adding another soul and another story to the Bonaventure fold. 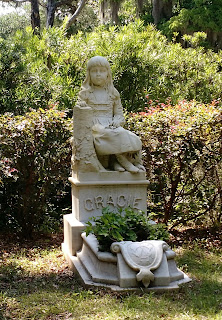 Bonaventure is most famous perhaps for the iconic Bird Girl statue, which after it graced the cover of John Beredt’s Midnight in the Garden of Good and Evil became too valuable to rest unattended and which was spirited away to a downtown museum. But there are other famous grave sites, and art, still available for the viewing.

There’s the resting place of Gracie Watson, marked with tenderly carved sculpture of the little girl who died at age seven. Her grave is protected by a wrought iron fence, saving the stone from the further erosion of human hands. Rain and the salt air have had their way, and so I imagine the features are not as sharply defined as they once were. I think it’s beautiful this way, worked upon by the slow hand of time, which is as tender and delicate as an artist’s touch. 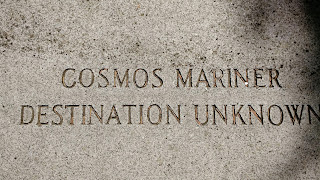 There’s also the gravesite of Conrad Aiken, a one of the finest American poets and a lover of Savannah. His grave is a bench—the legend goes, he wanted to provide a place for visitors to stop, rest and have a martini with him – engraved with two telling phrases: “GIVE MY LOVE TO THE WORLD” and “COSMOS MARINER DESTINATION UNKNOWN.”

Bonaventure is – and perhaps this is why I love all cemeteries so – a place of stories. Some are long and raveling. Some read “The End” all too soon. Some are mysteries, marked only by a stone that says “Mother” or “Baby Boy.” But all invite us to participate in the telling. All ask us, the living, to continue the tale.

*If you’d like to see more of my photos from Bonaventure Cemetery, you can visit my Pinterest board: https://www.pinterest.com/tinawh/bonaventure-cemetery/