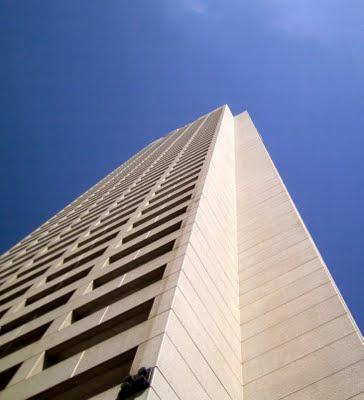 This photograph captures one of the things I love most about Atlanta -- its up-ness. I have yet to experience another city so jostling, so elbow-to-elbow with its own image, with its head tilted to look into the high blue. I don't know the name of this building. It's right beside the Fox Theatre, just off of Peachtree. But on this spring day, with this limitless sky, it seemed as if it thought it just might make it to the top if it could just s-t-r-e-t-c-h another inch. That's Atlanta to me. Always after that extra inch.
Posted by Tina at 5:30 PM 1 comment:

After reading NIGHT ON FIRE, I asked Douglas Corleone if he'd be willing to answer a few questions about himself, his book, his protagonist, and what's next for him on the literary horizon. He graciously agreed. So here you go, ladies and gentlemen -- three fastballs right over the plate for Mr. Corleone.
1. I've read in other interviews that Kevin Corvelli shares some personality traits with you, only on a more out-sized level. Care to elaborate?
When I set out to write my debut novel ONE MAN'S PARADISE, I wanted a lawyer-protagonist who was not only flawed, but very aware of his flaws -- and honest about them in his interactions with other characters and with readers.  Suffice it to say, I didn't have to look very far for a criminal defense attorney with flaws -- I saw one in the mirror every morning.  So my own insecurities, phobias, vices, and yes, arrogance, became Kevin's, the only difference being that heroes (and anti-heroes) need to be larger than life, so I exacerbated my own flaws for the sake of the story.  (Some people might suggest that I played them down, but I would disagree).  I also provided Kevin with what I think are my strengths - a quick wit, a touch of charm, and a deep-seated desire to do what's right.  Kevin's every bit as conflicted as I am, but like me, he has a desire to sort through his psyche and improve what needs improving.  That should take us through the next 30 or 40 books.

2. If you could sit down with yourself when you first started writing this series and offer as-yet-unpublished you some words of wisdom, what would you share?


I'd tell him to put down the pen and run back to the courtroom as quickly as possible.  I'm kidding (somewhat), of course.  But I would definitely fill him in on the realities of today's publishing industry.  I'd make sure he knew that the lion's share of promotion would fall squarely on his shoulders, and that anemic book sales could end his career before it started.  I'd prepare him for critics and remind him about the demographics of today's fiction readers.  I'd teach him about branding, and emphasize the difficulty he might face switching genres.  If he asked whether all the hard work, all the waiting and rejection, would be worth it...I'd tell him, yes. I'd tell him that patience and persistence are key.  And that hearing good things from readers about his work will melt his heart and ultimately make the whole damn process worthwhile.


3. Any other writing projects in the works? Any tantalizing clues for your readers about what's next for Corvelli and company? 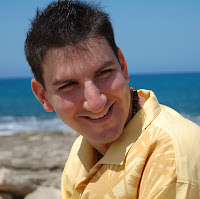 DOUGLAS CORLEONE is the author of the Kevin Corvelli crime series published by St. Martin's Minotaur.  His debut novel ONE MAN'S PARADISE won the 2009 Minotaur Books/Mystery Writers of America First Crime Novel Award.  A former New York City criminal defense attorney, Douglas Corleone now resides in the Hawaiian Islands with his wife and son.  NIGHT ON FIRE is his second novel.
You can find NIGHT ON FIRE at your local bookstore or through Amazon.com (find a buying link here). You can read more about Douglas Corleone and this award-winning crime series at http://www.douglascorleone.com.
Posted by Tina at 8:34 AM No comments: