In Blood, Ash and Bone, the third novel in my Tai Randolph/Trey Seaver series, I created a fictitious law enforcement agency, a task force collaboration between the Atlanta Police Department and the FBI. By the time the book was released, my pretend organization was real (it was called AMMO for Atlanta Metro Major Offenders Task Force).

In Deeper Than the Grave, the fourth book in the series, I decided to paralyze Atlanta in a freak snowstorm that stranded the entire city. I decided this one month before Snowjam 2014 hit. I was literally writing the scene when I saw its true-life version playing out on my television.

And so now I’ve just finished writing the fifth book, Reckoning and Ruin. This one takes place in Savannah, Georgia, during the springtime. Because my protagonist Tai Randolph is a woman who likes to be on the water, I sent her off on a fishing excursion to press a reluctant boat captain for information. I made her take Trey, her reluctant partner in crime solving, along.

Guess what she and Trey run across? Here’s a clue.

That’s right, cue the soundtrack and get a bigger boat, I’ve cast a great white shark in my next book. Her name is Mary Lee, and true to how I’d written her, she showed up in the coastal waters off Savannah on April 9, almost exactly when she made her cameo in Reckoning and Ruin.

I tell you, the lines between fact and fiction are quite blurry at times.

No need to stay out of the water, though. Chances are slim that you and Mary Lee will get a chance to meet face to fin. People still worry, however. Thanks to The-Movie-The-Will-Not-Be-Named, sharks of any variety -- but especially great white sharks – get a bad rap. But they’re not the bloodthirsty killing machines they’re made out to be.

I should know, I’ve swam with them, dozens of them at the time, and I still have every limb on my body. But don’t take my word for it; check out the statistics – worldwide, annual shark attack fatalities average in the single digits or low teens. Meanwhile humans kill 11,417 sharks per hour. Per hour. Now who’s looking bloodthirsty?

Other interesting facts about these fascinating animals:

* Great white sharks can detect one drop of blood in 25 gallons of water, and they can sense blood up to 3 miles away.

* Sharks have a tongue made of cartilage called a basihyal; they use it to sample prey, to see if it is a good idea to eat it or not.

* In contrast to most fish, which tend to be cold-blooded, the great white shark is warm-blooded, so it can regulate its own body temperature, thus allowing it to adapt to different water temperatures (in Mary Lee’s case, from Tybee Beach to the Jersey Shore).

* You’re more likely to die from lightning strike, a falling coconut, a vending machine toppling onto you, or even tumbling out of bed. Seriously.

Mary Lee is a most eloquent spokesfish for her species – she’s been profiled everywhere from National Geographic to Fox News and has her own Twitter account: @MaryLeeShark. She’s 16 feet long and 3,456 pounds, and enjoys roaming the Eastern Seaboard. If you want to find out if Mary Lee is in your neighborhood, you can track her on OCEARCH’s Shark Tracker page, along with hundreds of other sharks that have been tagged and released.

One of the themes I like to explore in my series is the tension between wild and tame, civilization and nature, and having Mary Lee make a cameo alongside Tai and Trey is an excellent way to think about what scares us, what should scare us, and why it often doesn’t. People claim that sharks are infesting our waters, when the reality is, we’re infesting theirs. And it’s time we stopped being the villain and started respecting and protecting one of the ocean’s most magnificent predators.

Here’s to Mary Lee and all her kinfolk. Long may they range.

Cover Reveal for RECKONING AND RUIN! Coming in April 2016! 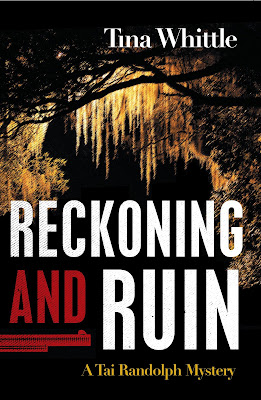 Tai Randolph has several anniversaries under her belt: a year in Atlanta, a year running her gun shop, and a year together with Trey, her sexy if somewhat challenging ex-SWAT lover. She's also helped put a year's worth of criminals behind bars, including her cousin Jasper, the leader of a white militia splinter group too violent for even the Klan.

Before she can pop the champagne, however, Jasper's back, and he's got a fancy new lawyer and a diabolical scheme sure to ruin both her and Trey. Soon she’s deep in familiar troubles – a missing ex-boyfriend, a creepily literate stalker, a passel of stolen money – and back in Savannah, the hometown she’d hoped to have left forever in her rear-view mirror.

Old memories, older ghosts, and a killer on the prowl – the Georgia Lowcounty is a dangerous place once the sun goes down. And Tai's going to need every wit she has to see the morning light.