Kennesaw Unconquered -- Where The Past Isn't Even Past 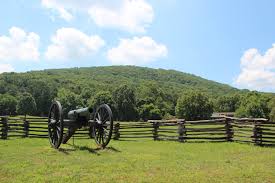 It’s always an odd feeling, when fiction and real life meet. It’s a crossroads moment – to the left, the world I created, with characters as I know as intimately as my own head. To the right, the world flowing under its own steam, with people of flesh and bone, events I cannot foresee or control. And then behind me history, as veiled as Scheherazade, and possessing as many tales.

I write a series featuring a woman who owns a Confederate-themed gun shop. Tai deals with Civil War re-enactors of both blue and gray, so she deals with the history of that period in American history, both the people who lived it then, and the people who re-live it now.

It was that history that brought me to the top of Kennesaw Mountain last weekend, during the swelter of a summer heat wave. My last visit had been six months previous, during one of the South’s more brutal cold snaps. It’s hard to remember such cold in this season of sweat and humidity, but once upon a time there was winter, and we had it here in Georgia. Would that I could have bottled some and saved it for now. I could make a fortune selling it on the parched sidewalks.

Kennesaw Mountain is a part of Kennesaw Mountain Battlefield National Park. During the summer, it’s a crowded place, full of picnickers and shady glens, leafy spots of shadow where somebody could get up to something nefarious. That day in January, I had the summit pretty much to myself, which made it an odd place to ponder its usefulness as a fictional murder site. My solitude felt too real, too precarious. They say in space no one can hear you scream. I suspect the same is true at the top of an empty mountain.

The ranger told me that during the winter, with the trees bare, I could see the ruts of the old road, that my view would be very much exactly like that the Confederates saw 150 years ago, as they waited for General Sherman to launch his next assault against their fortifications. The boys in gray suffered a rainy winter and an equally wet spring. Diaries from the time mention the mud and the bugs and the mud and the misery and the mud.

At the top, I saw a different Atlanta in the distance than Sherman did, however. That great Southern city had been in the distance then too, the gem in the Confederate crown, but in the twenty-first century, Atlanta was a shimmery mirage of steel and smoked glass, crisscrossed by Peachtree Road and Peachtree Lane and Peachtree Industrial Boulevard. Over seventy different streets with Peachtree in the title.

Sherman would eventually capture Atlanta, but not by capturing Kennesaw Mountain.  He never would get to the top of this particular summit. And it felt unconquered, it really did. Like the ghosts were watching me all the way down the mountain, making sure my trespass was a short one.