The Twelve Days of WICKED LITTLE SECRETS: The Eighth Day

On the eighth day of Wicked Little Secrets, my true love gave to me . . . 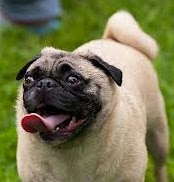 Dashiell stalked through the streets back to Wickerly Square, keeping his hand tight on Vivienne’s wrist to keep her from scurrying to some other squalid rookery and getting him killed. She hurried alongside, trying to keep up with his stride, as she held traumatized Garth. The hound pleaded to Dashiell with his round buggy eyes as if to say, “Don’t leave me with this mad lady!”

Dashiell found a narrow alley running beside a wine merchant’s shop and pulled her inside. The lane was empty except for a bony black cat pawing at something small and dead in the gutter. Garth leapt from Vivienne’s arms and the cat shot off, disappearing into a small opening at the bottom of a rotting door, leaving Garth to sniff and then roll on the deceased creature.
Posted by Tina at 9:57 AM