Angelina Rain at Author in Training is hosting a blogfest over the New Year's Day weekend . . . and you're invited! Sign up your blog, and then get ready to share your best or most bizarre 2010 accomplishments along with your goals for 2011.

Go to Angelina's site for more details, the shiny graphic, and to sign-up on the linky link.  Click here!

Join us as we pop the cork on some virtual champagne and celebrate the old as we welcome the new!
Posted by Tina at 12:23 AM No comments:

You can tell I'm in THAT stage of novel-making by the state of my house. My housekeeping skills have never been of the white-glove variety, but I do like to have things in their place. Now, however, there are dirty tennis shoes and dog toys under the Christmas tree, stray bones and eyeballs and pumpkins from Halloween on the kitchen counters, random half-created gizmos and art projects hiding here and there. 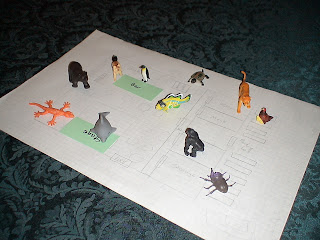 These are the products of sharing living space with a bored aerospace engineer and crafty girlchild. I must confess, however, that one of these bits of weirdness is mine -- this one right here, the sheet of graph paper adorned with a Wild Kingdom of tiny plastic creatures. It sits right where the centerpiece used to be on my dining room table, and I am afraid that's where it will continue to sit for the next month or so.
It represents the opening scene of Book Two, the murder that must be solved by my intrepid protagonists. This scene is dense with characters both major and minor, both heroic and villainous, moving about a tight limited space, seeing only what they're supposed to see, so that the murder will be a Mystery and not an Omigod So-and-So Just killed So-And-So! (because that would make for a lousy mystery novel).
Pulling this off was providing ridiculously difficult. I couldn't remember who was where, much less keep track of what they'd seen. So I decided to stage the scene in 3D, with my setting drawn out (badly but efficiently) on some graph paper. Then I picked out little plastic critters from my daughter's toy chest to represent my characters.
That's Tai, my sleuth, played by a frisky red fox. And there's Trey, my hero, represented by a kinda pissed-off looking black bear. I chose a dung beetle to play my odious bad guy/victim, then threw in a lizard, a dolphin, and a deceptively innocent-looking chicken as suspects. The role of the red herring is played by an ornamental carp.
It felt silly to start with, but then I realized how many plot holes I was uncovering as I moved my characters around in real space and time. Who would run into whom in the hallway. Who could eavesdrop. Who I had in two places at once (oops). All of which saved me a ton of re-writing.
Wild Kingdom meets Clue is still set up on the dining room table. I'll have to move it before Christmas dinner. Or maybe I'll just throw some holly on top of it and call it decoration. Either way, I think I've found a new tool for my writer's toolbox (which is getting more eccentric by the day).
Posted by Tina at 8:57 AM No comments:

My Guy and His Gun

No, not the Hubster. My other guy, the one I spend hours with, just the two of us, while I hang on his every word. He's frustrating, challenging, and somewhat stubborn, plus I think he's mad at me right now. But he's something else, that's for sure.

His name is Trey Seaver -- we've been getting to know each other for seven years now. I wish I could put a photo of him up here, but since he's imaginary, you'll just have to use your, you know, imagination.


In the meantime, we can talk about his gun, which is almost as smooth as he is. Almost. 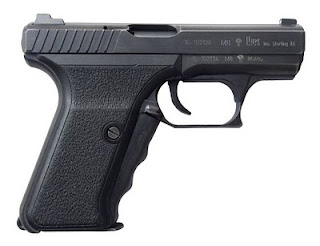 This is the Heckler and Koch P7M8. It's a nine-millimeter made in Germany, and it's one of the finest firearms you'll ever shoot. Or so I've been told. H&K stopped production in 2008, so they're hard to find now, and quite expensive (about $1200).


But oh, are they worth it. The H&K P7M8 is compact, accurate, and virtually jam-proof. Plus, its squeeze cocking mechanism makes it one of the safest guns ever made. Instead of a safety that switches on or off, the P7M8 requires that you squeeze the mechanism on the pistol grip (you can see it on the photograph to the right), which pulls back the firing pin. Release your grip, and the firing pin is safely disengaged. You can then drop it, toss it, kick it between the goalposts -- not a stray bullet in sight.

Most importantly, it kicks ass, and it kick it swiftly, efficiently, with style to spare. Which is exactly the kind of weapon my guy needed tucked up under his Armani suit.

One of the themes in The Dangerous Edge of Things is power -- how we get it, why we want it, how we fight tooth and nail to keep it. A gun is power condensed to its raw elemental nature. It makes us confront in direct, concrete fashion all the philosophical ideals surrounding individual freedom, societal obligation, and the value of a human life. One of my characters says that you'd better not pick up a gun until you're absolutely certain you know what you'll do with it -- and what you won't -- and that you'd better make that decision long before you MUST make that decision.

Guns are attractive, the P7M8 especially so. It's ergonomic, created  for the human hand, balanced for the human touch. It is an extension of everything humans are capable of, our fierce protective instincts combined with our predatory cunning. Guns make us ask hard questions, and they don't provide any answers. They just mutely do exactly what we tell them to do, nothing more, nothing less.

I'm not afraid of them -- I grew up around guns of all kinds, and I happen to find them quite beautiful. It's the human finger on the trigger that gives me pause. Guns don't scare me; people scare me. To my writerly ears, that sounds vaguely like a tag line from an NRA commercial. But it's the truth. When Trey pulls his weapon, he knows exactly what he will and won't do with it. I'm not sure that I do. So until I do, I think I'll let Trey be the one to carry the gun, not me.